A HOME CINEMA PROJECT: THE CINEMA LIVES AT HOME… REALLY! 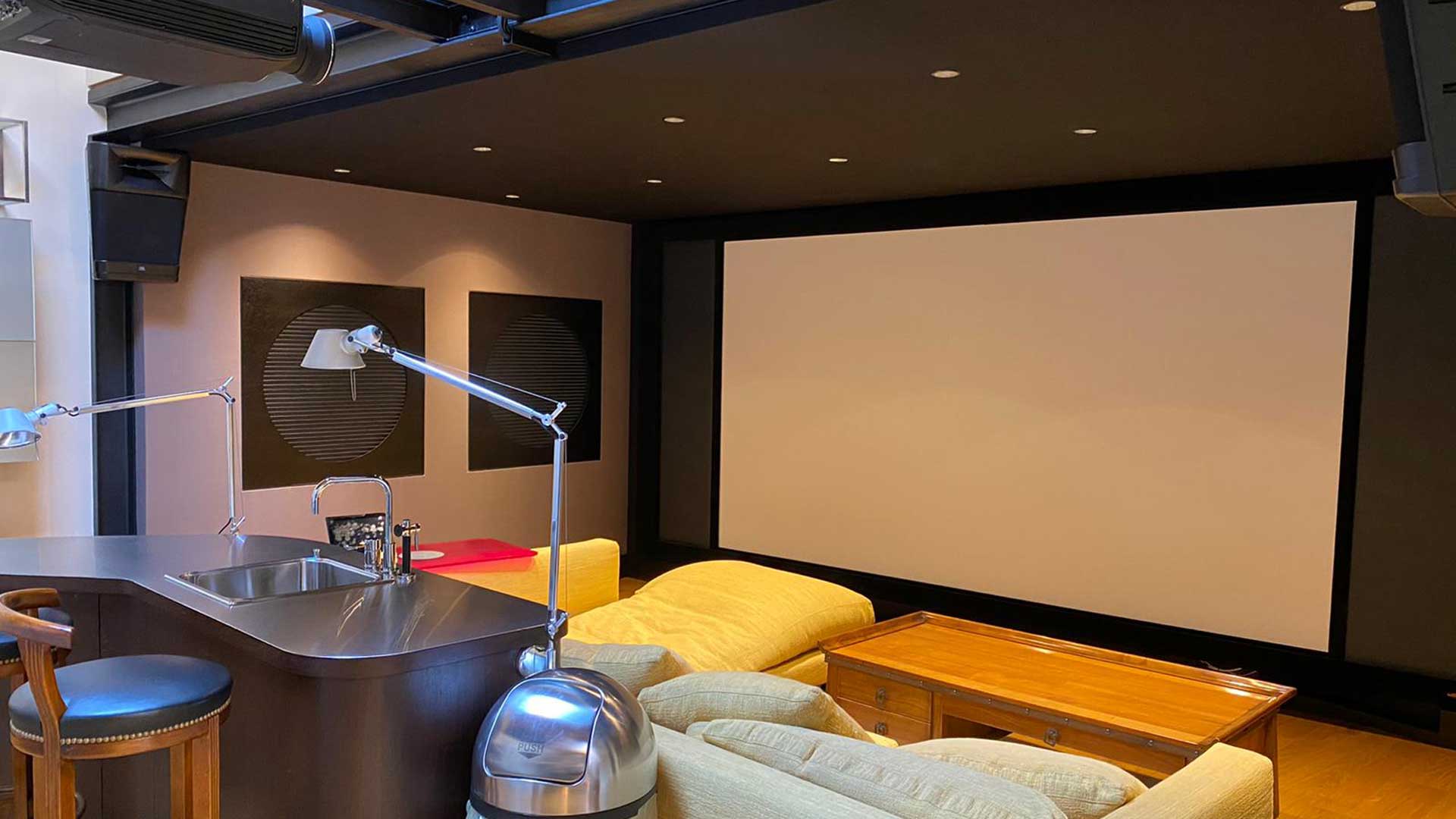 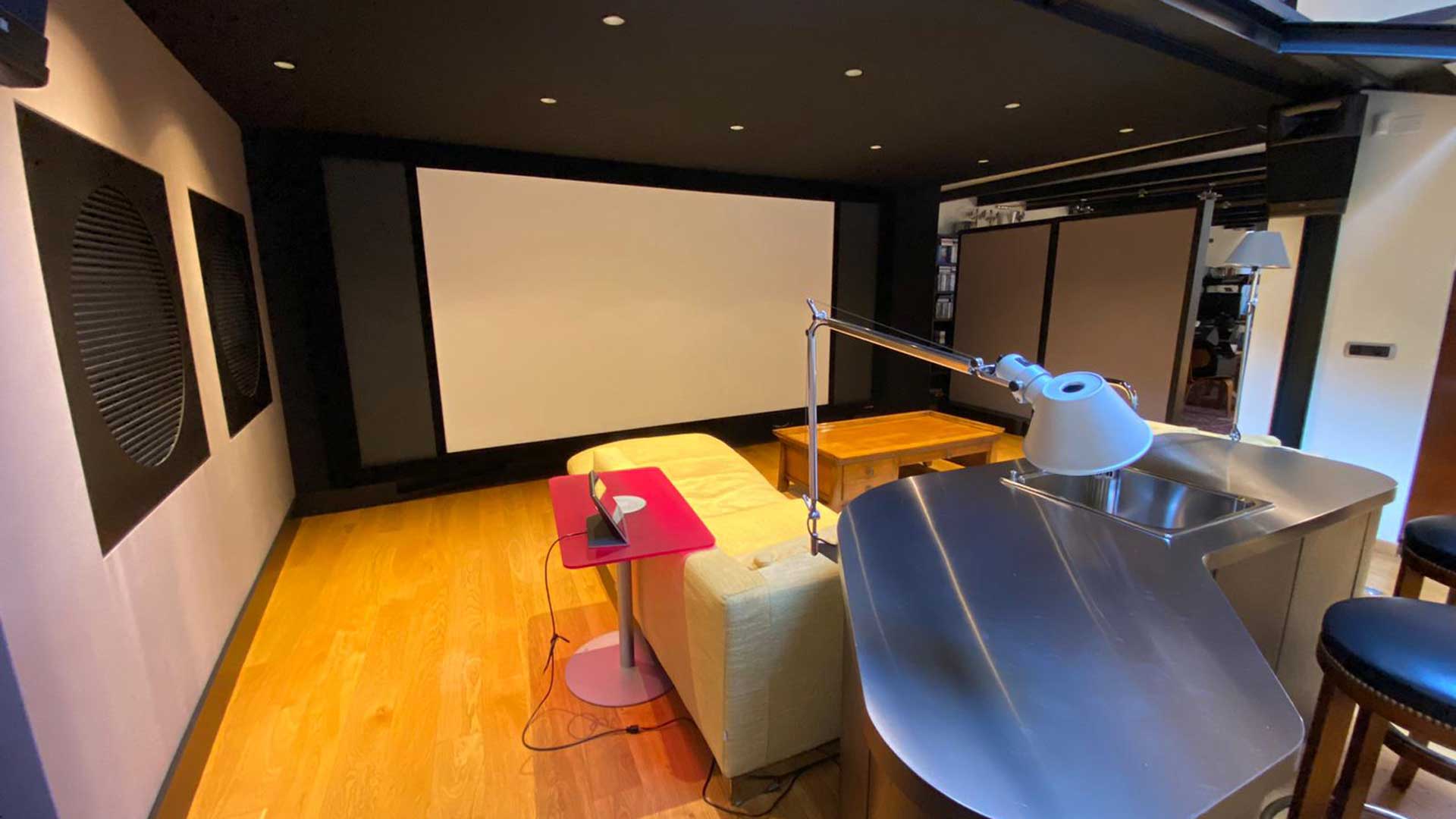 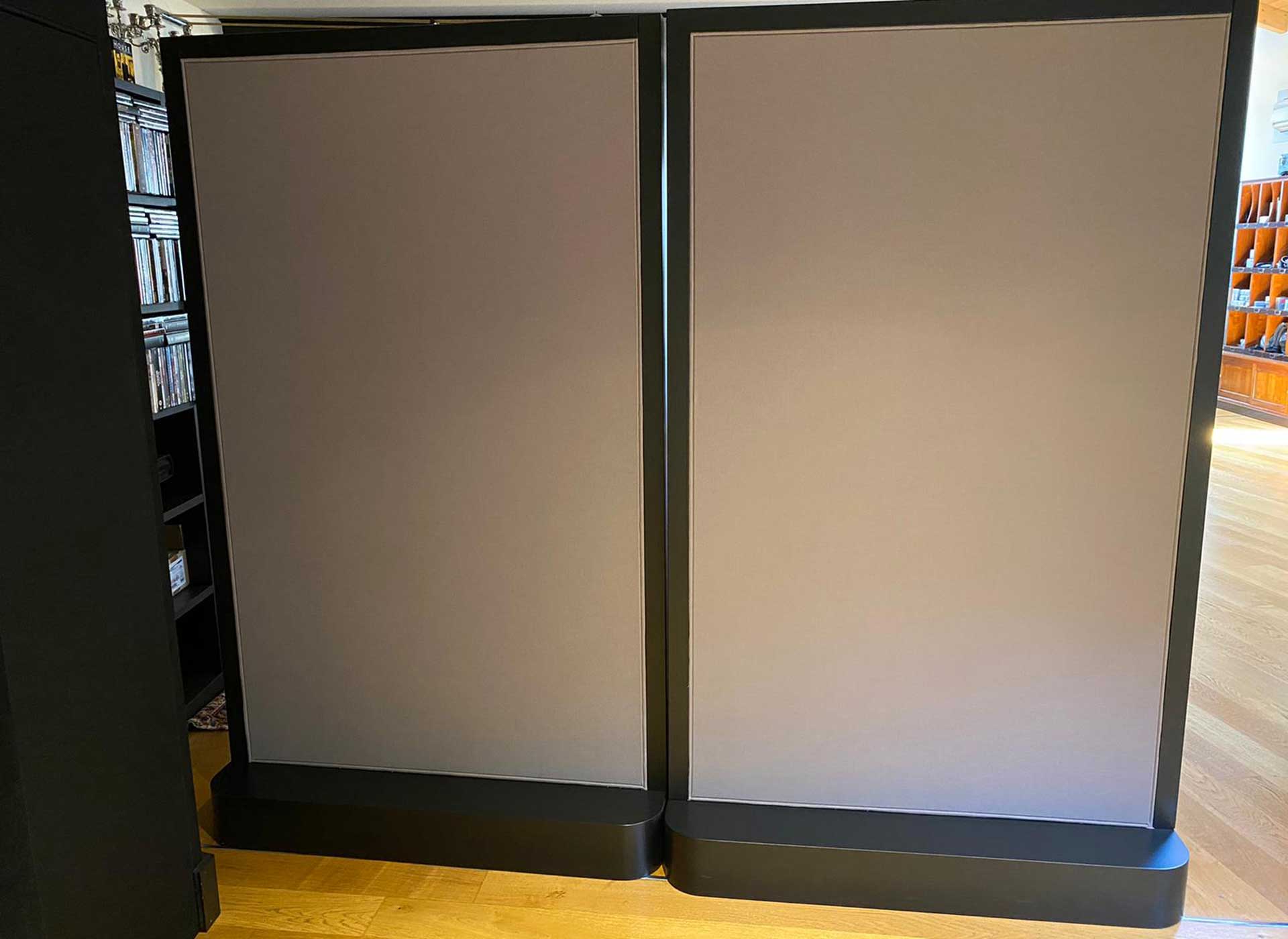 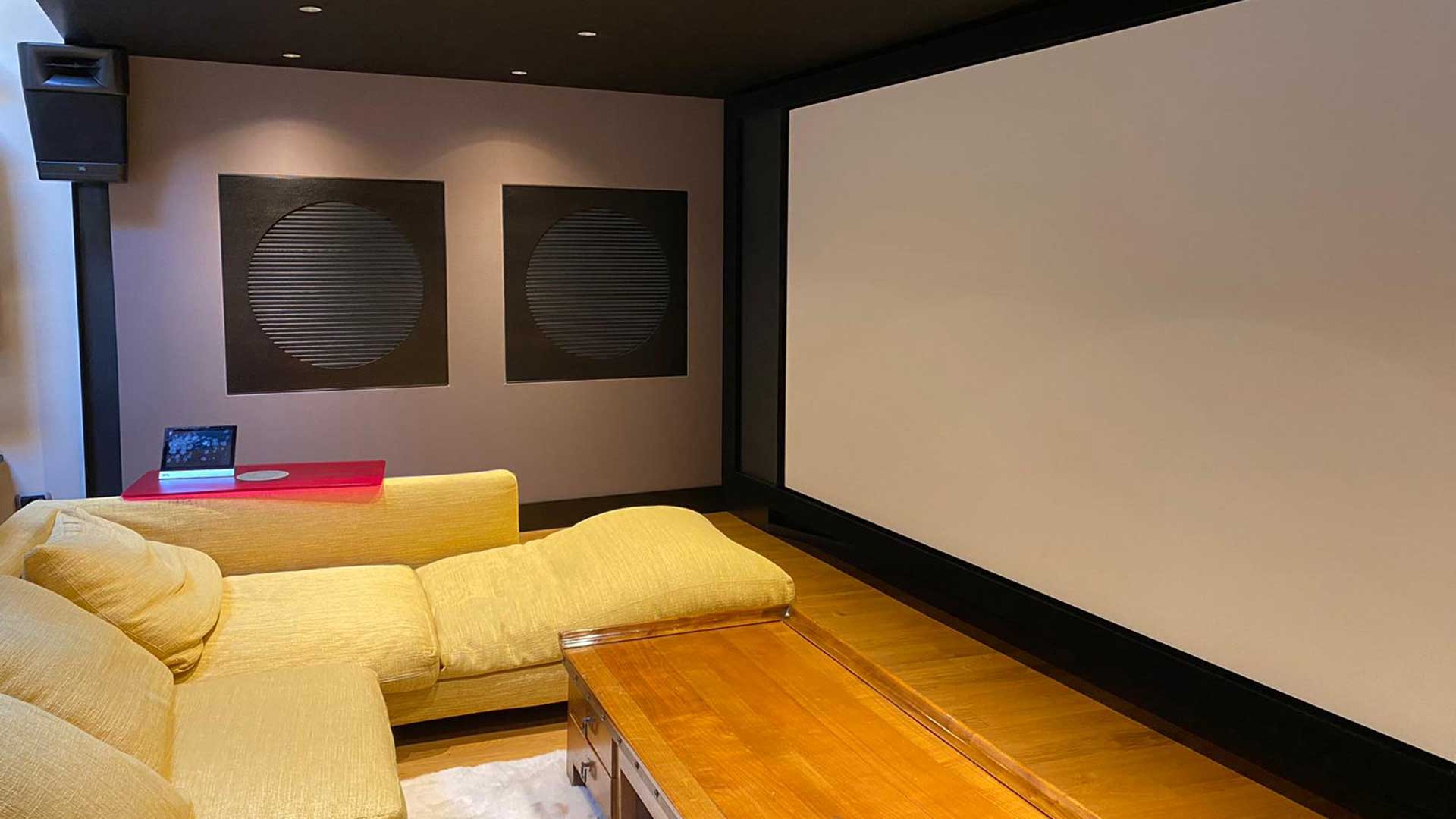 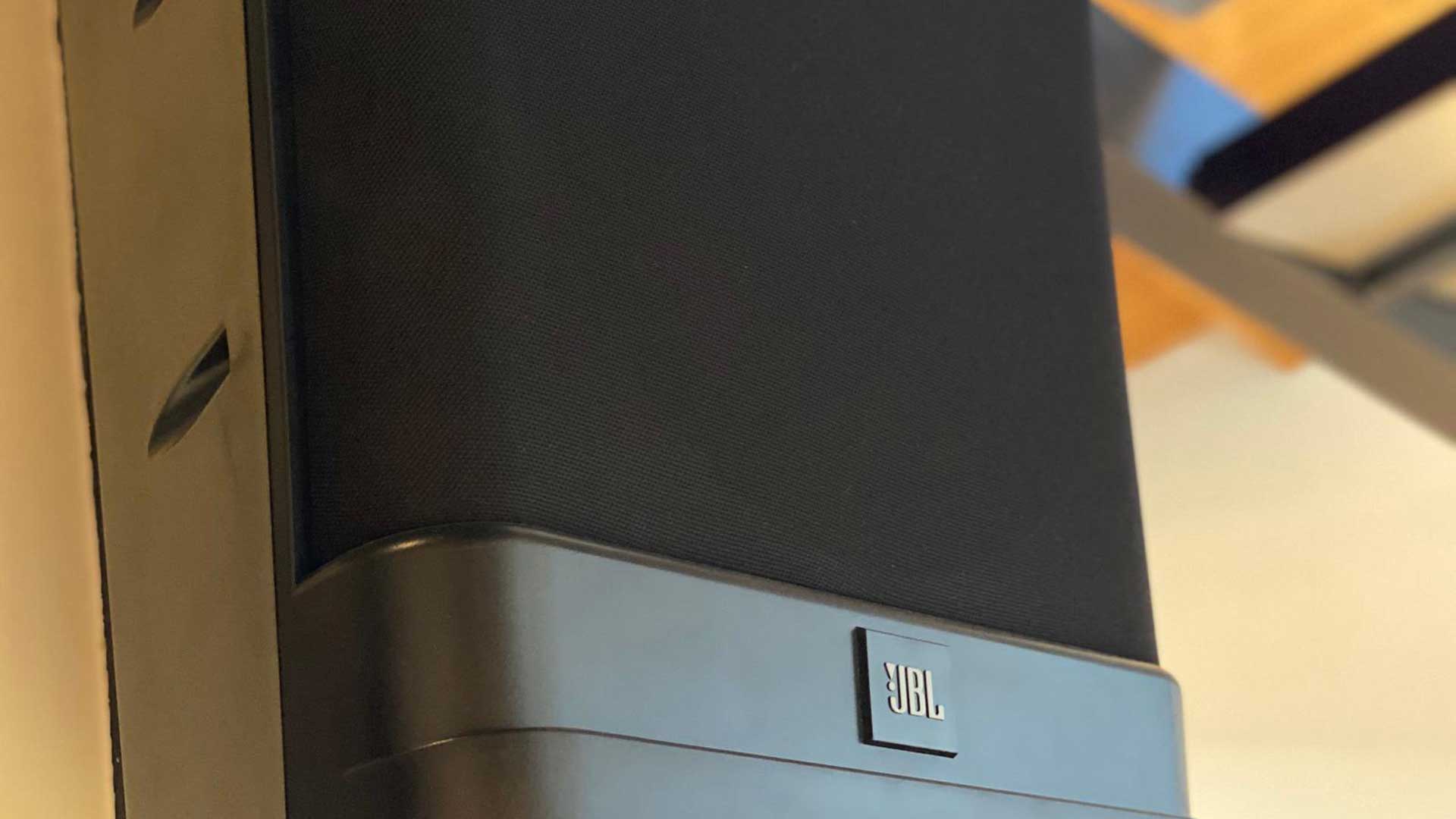 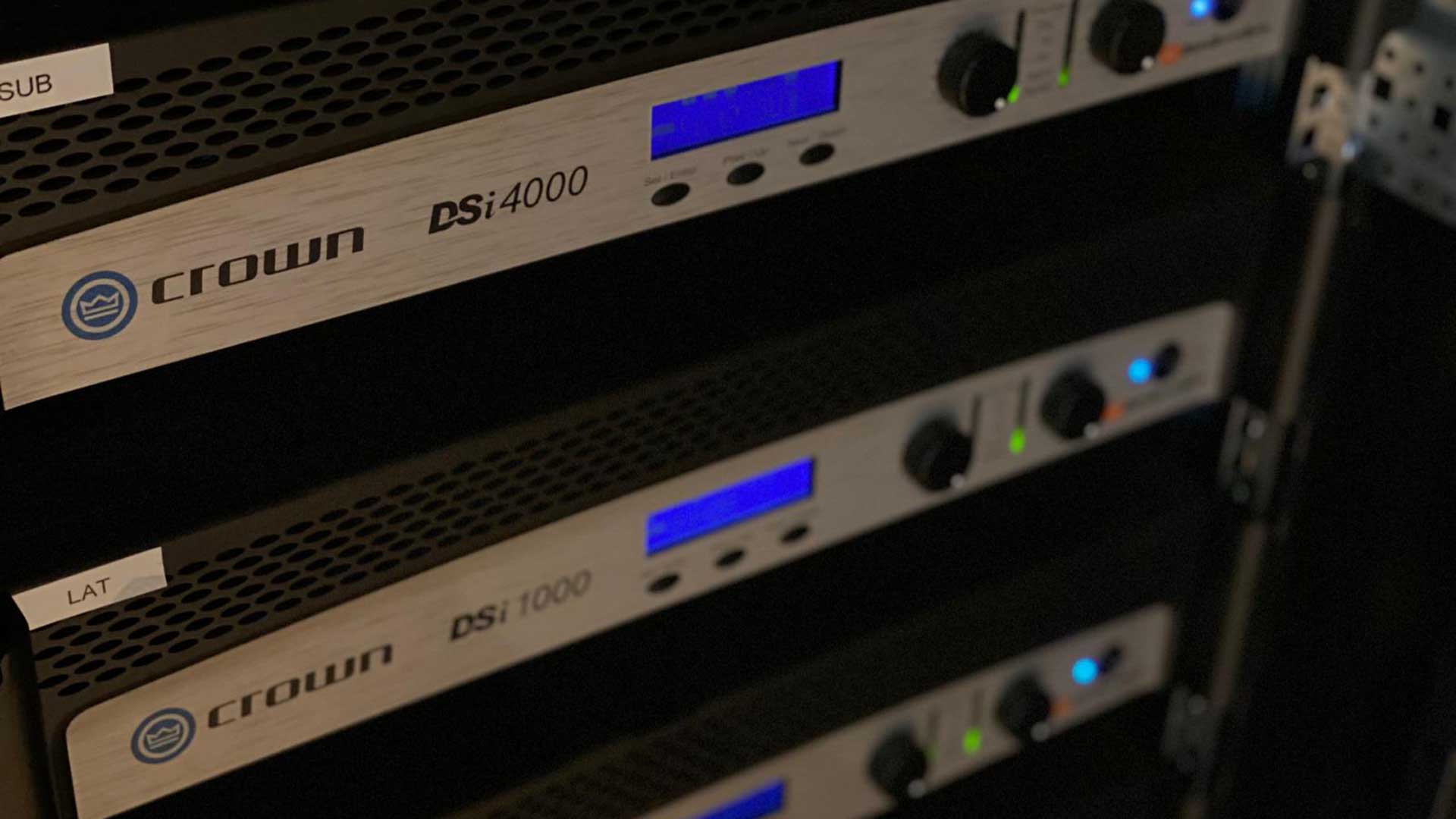 A home cinema project: the cinema lives at home… Really!

In his house in Rome, Enrico has built a home cinema that fully replicates a cinema goer’s experience. Creating this type of acoustic environment in an open space was a great challenge. Our work – designed by Studio Sound Service – gave Enrico a cinema room in the living room!

It’s not a cinema, it’s not a home theater, it’s not even a cinema mixing room… The acoustic environment we built for Enrico is so unique that we cannot christen it. This home cinema project is based on the quest for an authentic cinema experience.

Much of the credit for the creation of a home cinema room goes to the Client. His nostalgia for the lofts typically found in the Soho neighborhood of New York City, where he lived for years, prompted him to recreate an open-space home in a former printing house in Rome. This atypical living space is perfect for satisfying his need for space and freedom, otherwise impossible to satisfy in a traditional apartment.

A projector and speakers were enough to reconcile his desire for freedom with his innate passion for cinema. Or rather, three generations of high-end acoustic systems and projectors were needed before finding the perfect setting. In fact, from 2002 to 2019, many of his audio systems could not match his desire for power and performance.

This is why – upon our first meeting – the Client already had very clear ideas about how he would like to enjoy his private cinema.

In short, the project brief can be summed up with a commercial from the early 90s.

Our task (and Studio Sound Service’s) was simply to make the project real!

We had to recreate a cinema-like experience, with its acoustic impact, its sound pressure, and an extremely limited reverberation time.

Right from the start, Donato Masci understood that the project would be somewhat atypical, as it would be different than the usual need for absolute acoustic perfection necessary in cinematic mixing rooms or recording studios.

Enrico had already chosen his audio system, thanks to the support of Leading Technologies: Blu-Ray DVD, Crown amplification, 3 gigantic LCR speakers JBL 3732 and an impressive SUB JBL 4642. What we are talking about is not an ordinary audio system… It is an authentic cinema system, capable of working in rooms with a capacity of 200 people.

To replicate the real cinema experience, we started with super-performing speakers and equipment, meant to last over time, with a very high performance and capable of literally tossing Enrico from his sofa, without ever reaching their maximum power!

One of the challenges for the acoustic design phase was the spaces. In fact, the room intended for the cinema is located below a mezzanine inside Enrico’s open living space.
How to do it? We have defined the environment’s perimeter with “gobos”, or rather mobile sound-absorbing panels on wheels. The panels would thus have “closed” the space along the entire length of the listening front.

Another necessary modification was the displacement of the staircase that accesses the mezzanine (also filled with sound-absorbing material) in order to leave an unencumbered space for the important absorbent layer at the back of the room and to avoid any sound reflection.

The placement and angle of the speakers was another fundamental choice to achieve a sound much more similar to that of the cinema. The JBL speakers used in this project are more spartan, “harder” (performing at medium-high frequencies) and they were created to provide a more authentic cinema experience than a normal home theatre.
We literally brought a cinema to the living room!

Aesthetically, Enrico asked for a minimal, no frills, environment, so as not to distract the user sitting on the sofa. Those who go to the cinema expect to enjoy nothing but the movie on the big screen. In this case, a Barco projector performs perfectly.

Finally, a last calibration of the entire system was made. A fine-tuning necessary to achieve excellent cinematic acoustics.

After the delineation of the work plans in May 2018, the project was completed in November of the same year. According to Enrico, it seems that his desire for cinema at home has been fulfilled.

“The result is really great. Even at very high volumes, practically at the edge of bearable, (there is) no distortion, no echo, no noises out of context. Excellent usability, (and an) excellent perception of the entire range of sound”.

“Certainly, beyond a threshold, the sound becomes so powerful that it overturns the knick-knacks (literally) but it was exactly what I requested, and I was completely satisfied.”

With Donato Masci of Studio Sound Service, we want to thank Leading Technologies, who has provided the audio system as well as the brilliant Alessandro Gianelli, Ing.!