MILK STUDIO’S CIRCLES ROOM: A MANTRA OF QUALITY AND VERSATILITY 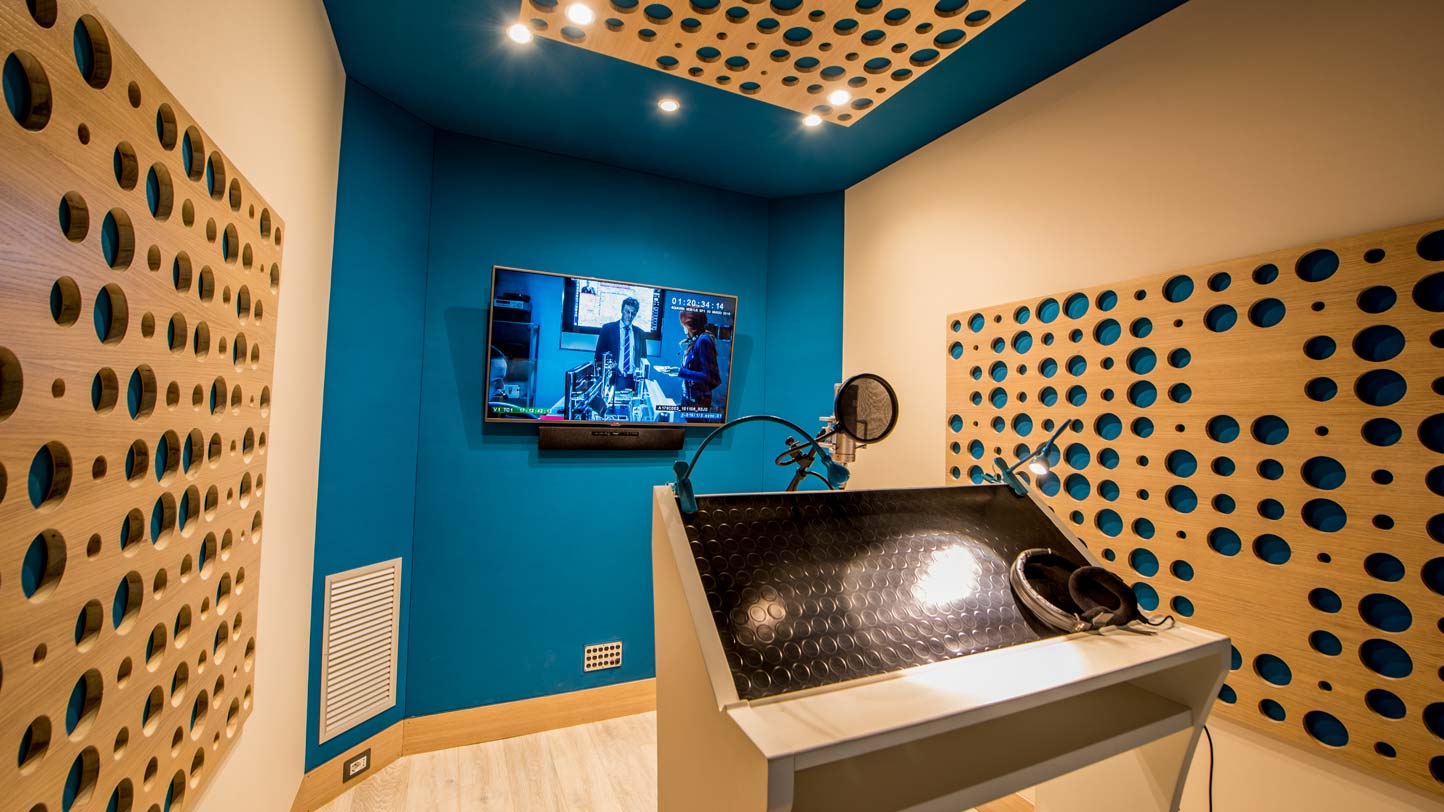 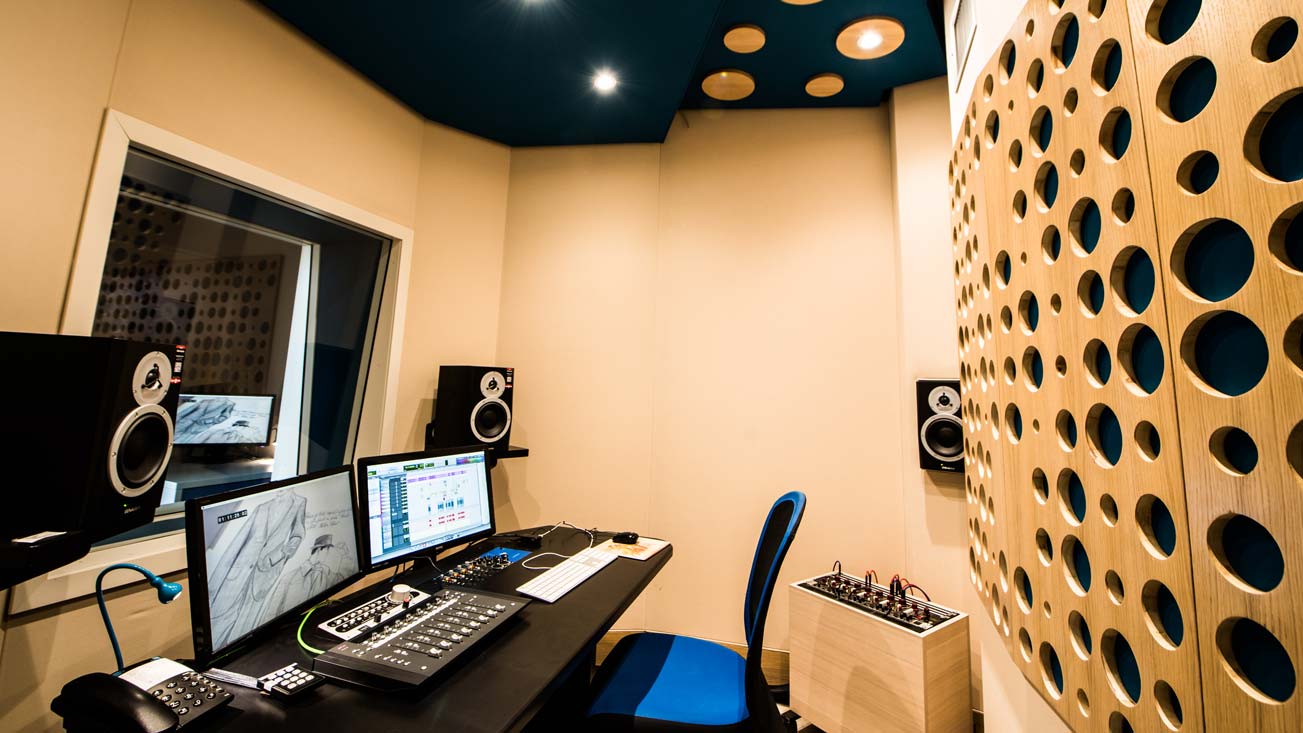 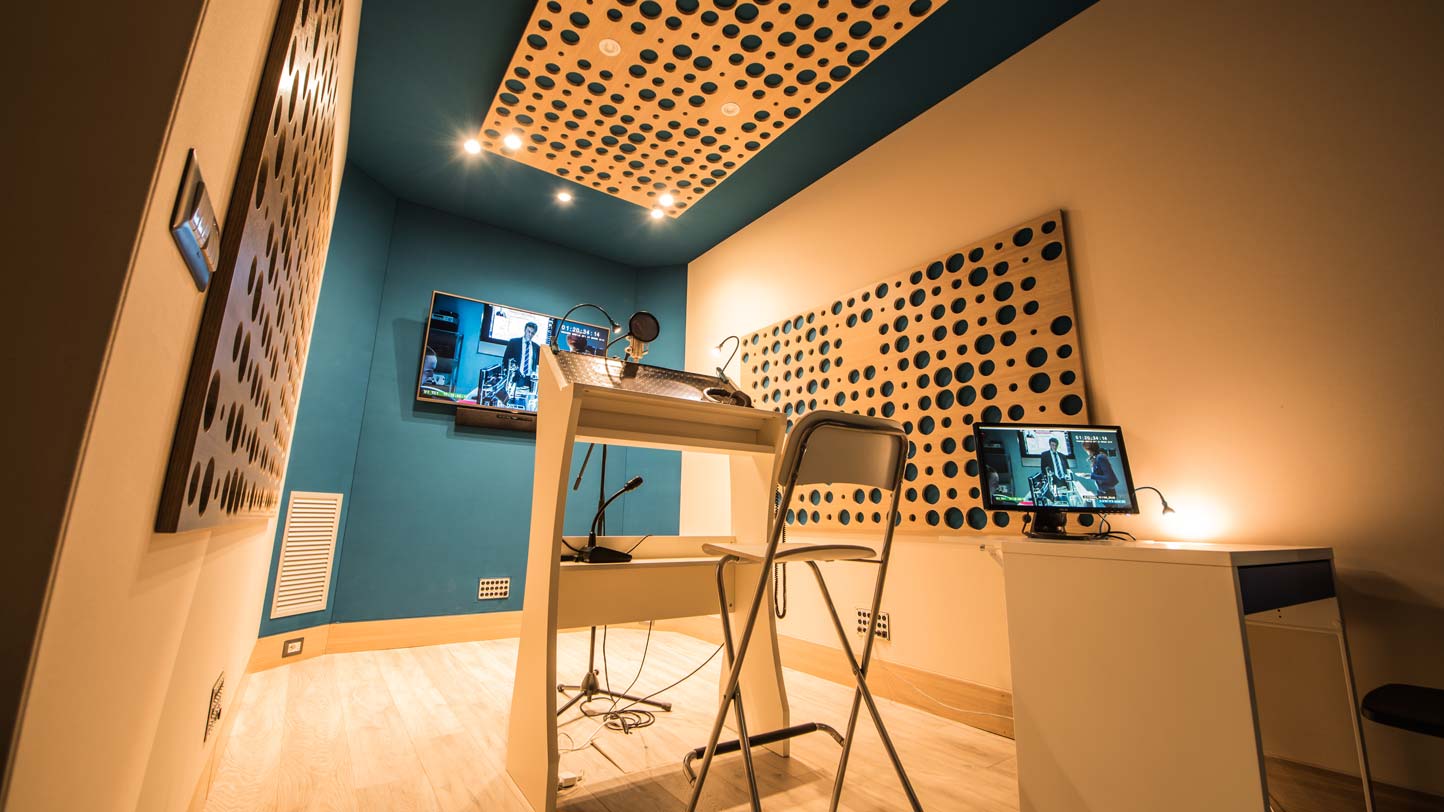 Milk Studio’s Circles room: a mantra of quality and versatility

Why limit a recording room to dubbing only? How can one make a Dolby 5.1 control room in small spaces?
If the project is straightforward, then design questions find answers in surprising solutions.
Alberto, Mario and Francesco – the founders of Milk Studios – have enlarged their range of work thanks to their new “Circles” room. The control and recording rooms were born under the sign of versatility.

When great professional and human values meet, everything becomes simpler and more harmonious. This was also the case for the birth of a post-production facility capable of fully managing prestigious audio projects. We’re talking about Milk Studios.
At Milk, the creative synergy between Alberto Rossetto, Mario Struglia and Francesco Wolf has found its natural environment.

The three, in fact, have known each other for a long time: Alberto and Mario had already worked together in the audio-musical sector, while Francesco Wolf – a film, TV and theater actor – has been a friend of Alberto since high school. Almost by chance, their professional competencies met at Milk. The technical-musical skills of Alberto and Mario coincided with the artistic direction of Francesco. A perfect equilibrium, evoked by the geometric circles of Circles.

Studio Sound Service designed those circles, and we built them.

Milk’s first mini-room took shape in 2012, in a former warehouse – strategically located in the northern area of Rome. Actors originating from the Roman art school, in fact, gave voice to advertising projects managed by Milk throughout Italy.

In 2017, the first upgrade of the building was followed by the addition of a new studio (control and recording rooms): the Circles rooms. This compact and efficient studio is the one that has contributed most to the launch of Milk in several areas: from advertising to video games, from e-learning to podcasts. 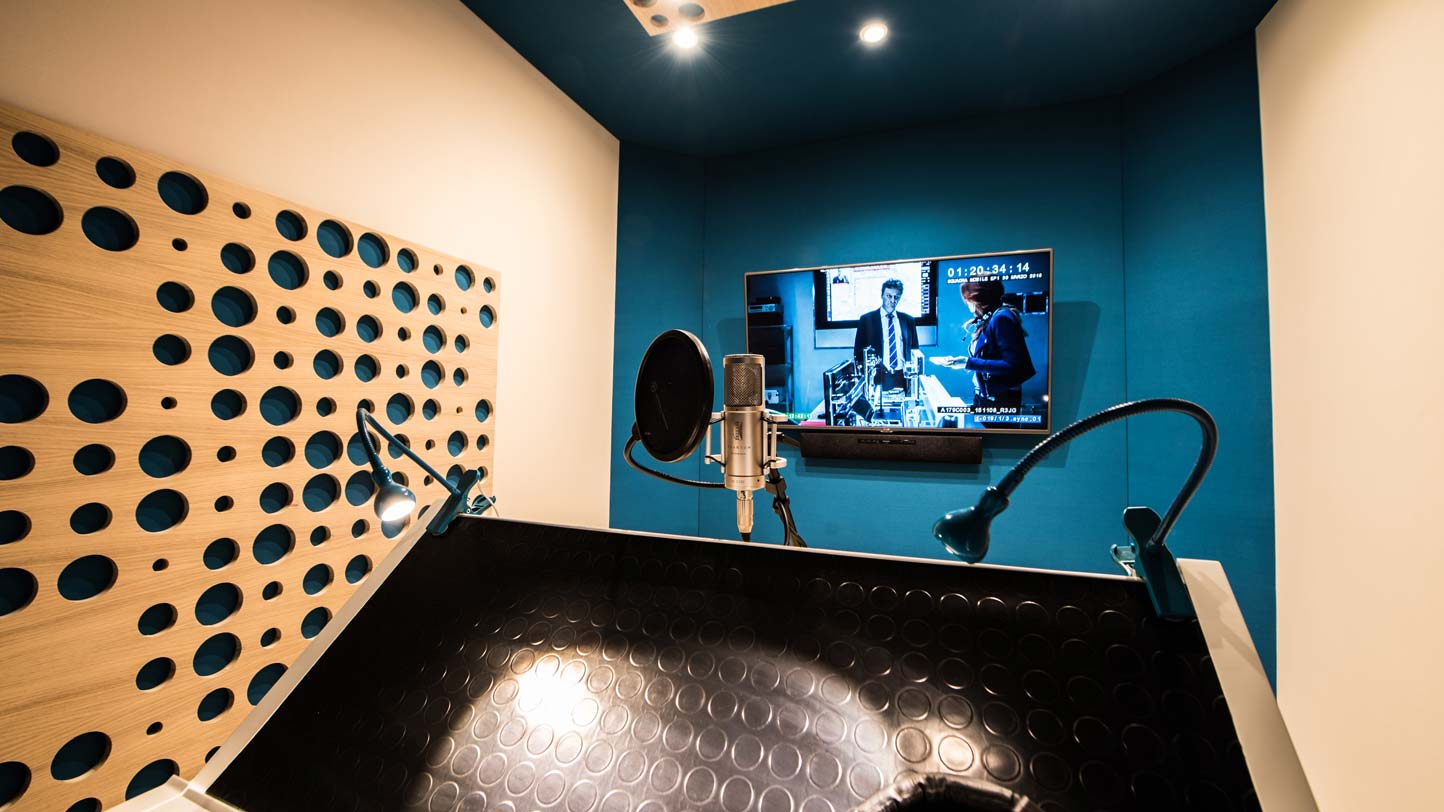 Circles: a room, an attitude

The increasing number (and heterogeneity) of the projects required the creation of a much more versatile room than the previous one. Milk’s rooms, in fact, would be animated not by voices alone, but also by music and sounds. The musical background of Alberto and Mario could thus be expressed and offered in an even more valuable way.

Milk handles audio post-production with a production management approach. They attend to the Customer’s project as the sole interlocutor, dealing with all the professional activities that orbit a project. An all-around, circular service, without sharp edges and with an always open mind. Thus the name “Circles”.

Once the idea was defined, the Proaudio team built the project – designed by Studio Sound Service.

An unused area of the Milk premises became control and recording rooms. The real challenge was to design for and build in small spaces. 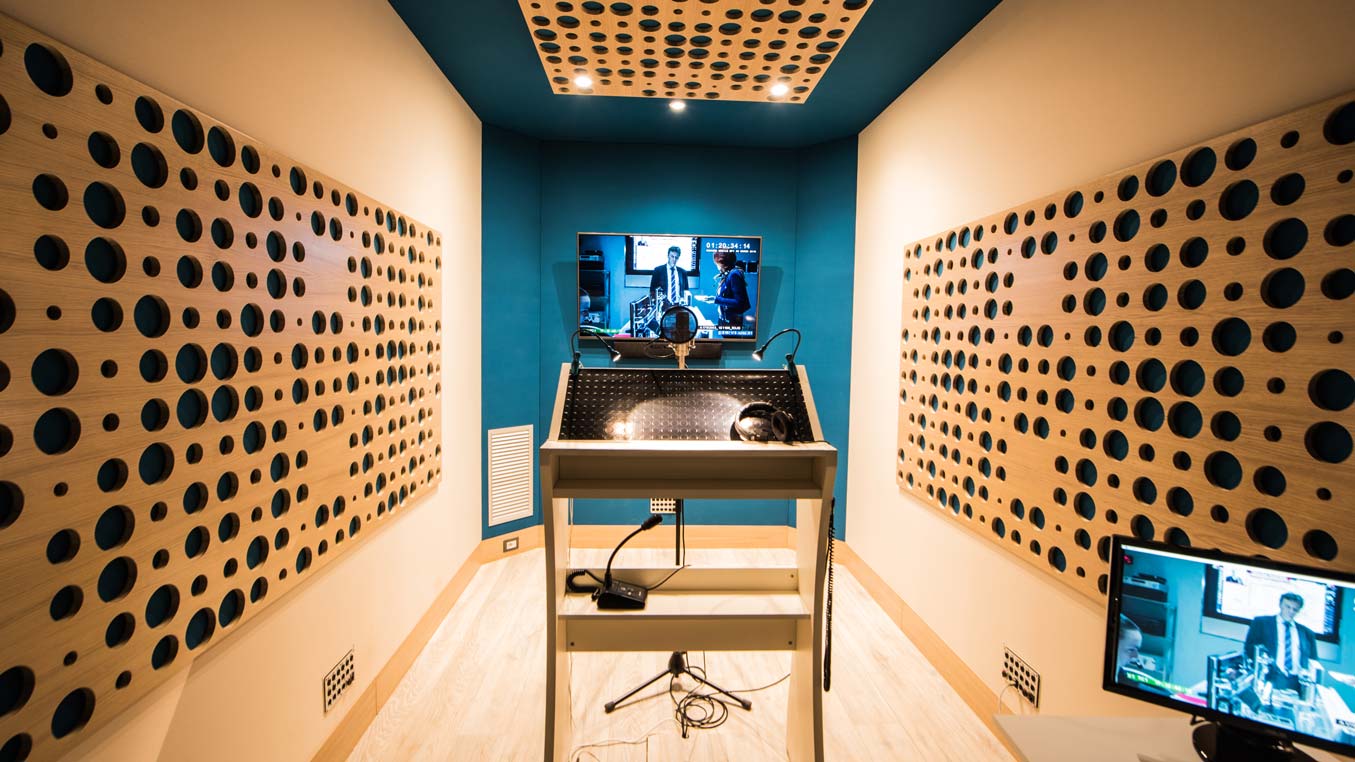 A pragmatic and versatile room

Let’s return to the opening question: why limit a recording room to the dubbing function only?

The principal requirement for the Circles project was to achieve the perfect balance between quality and versatility, since the recording room would be busy with musical projects, as well as dubbing.

The winning design choice was to sacrifice space in the control room in favor of the recording room. Today, Circles has enough space for an actor to record, host a dubbing assistant, and maintain the space for murmuring (and, of course, the lectern). From an acoustic point of view, the room is much less abrupt and stale than the classic dubbing rooms and it provides the ideal “freshness” for musical projects.
Not surprisingly, the first project recorded in Circles was an album featuring baritone guitar. 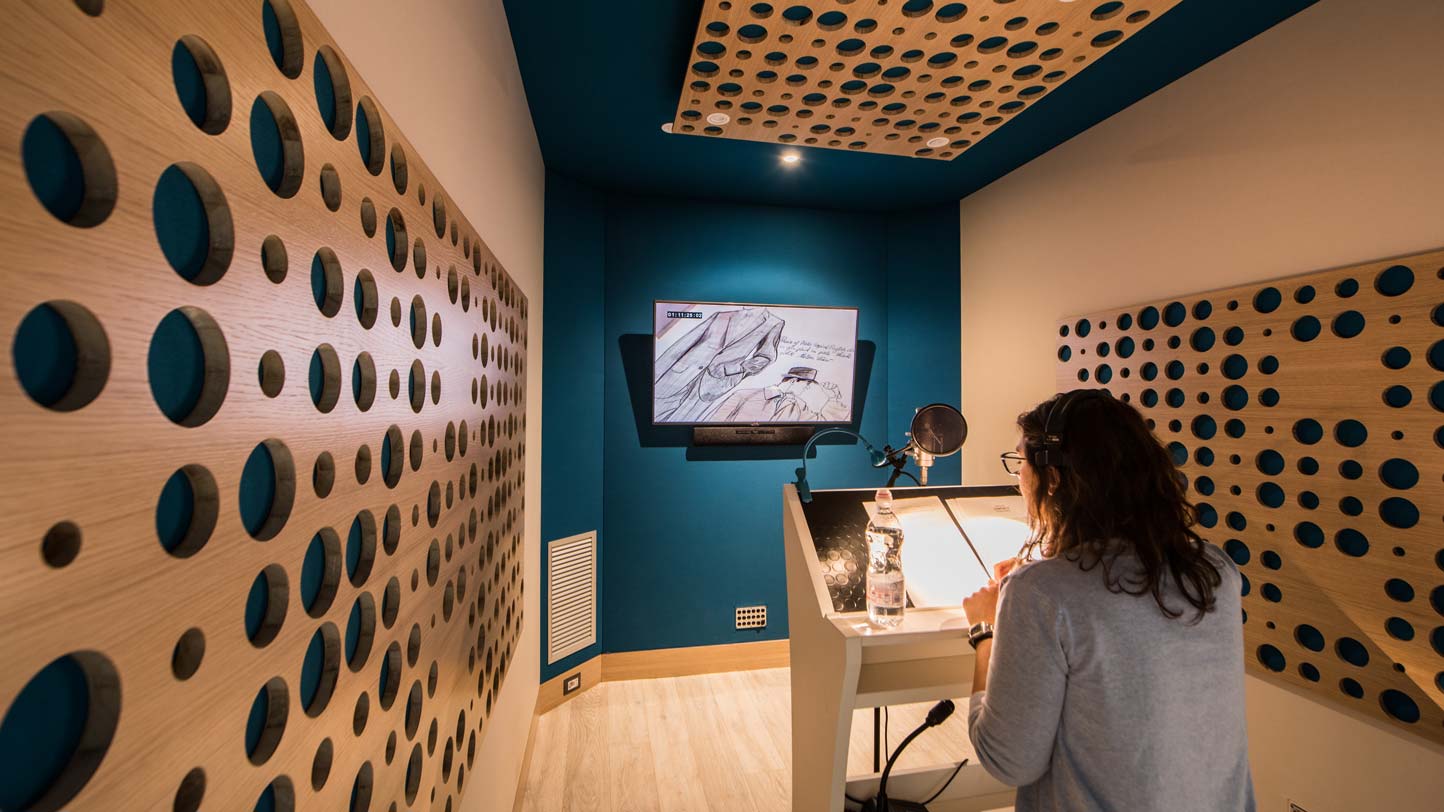 Versatility was the mantra behind the project. That’s why we equipped the recording room with 4 headphone lines and 24 microphone lines.

The construction of the control room followed the same design approach. Despite its small size, it accommodates a Dolby 5.1 system, thanks to the space for nearfield monitors on the front and back. 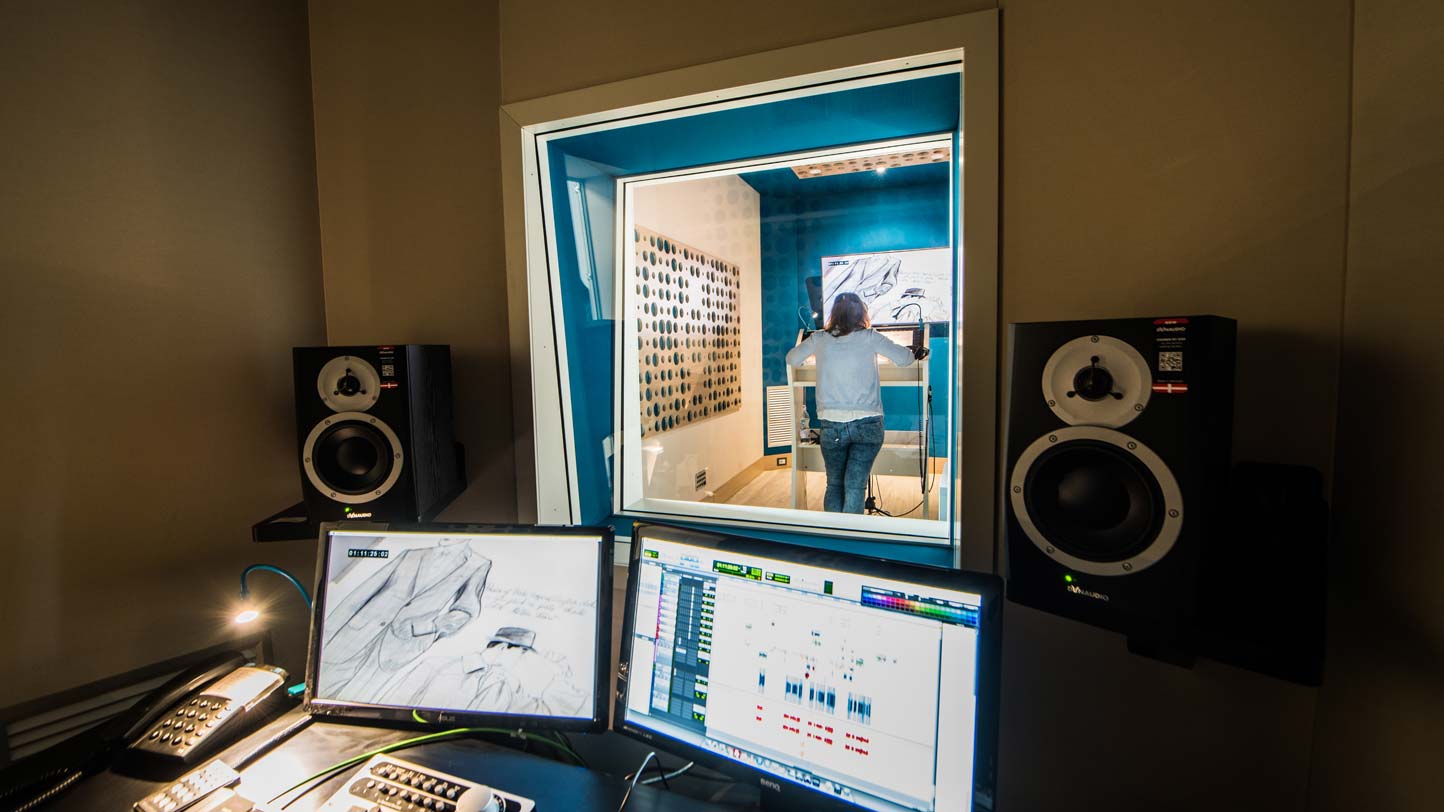 How can you obtain a Dolby 5.1 control room from limited spaces?

Space optimization and a mobile desk are the solution.
The equipment is positioned on a vertical mobile rack, rather than on the classic horizontal rack, to save as much space as possible. The desk was designed to move on a longitudinal axis and to be positioned on two work set-ups: one for mixing, in the middle position, and one for recording, in a forward position to give more space to directors.

The available square footage was exploited to the maximum so that it was possible to work on film soundtracks in Dolby 5.1. One film above all, the soundtrack of “La pazza gioia” by Carlo Virzì (film directed by Paolo Virzì).

From an aesthetic-functional point of view, the sound diffusers could not fail to refer to the name of the room. Many small circles optimize the acoustics of the dubbing and control rooms that hosted actors such as Willem Dafoe, Greta Scacchi and Salvatore Esposito.

Ready for the next project

Fresh, compact, pragmatic. The Circles room is Milk’s flagship, an audio post-production facility that treasures the quality and versatility of the professionals it has at its disposal.
Also, thanks to the new room, Milk Studios can welcome the customer for the planning brief and offer the most appropriate artistic and technical solutions for their budget.